The first of my Alcoholic Ice Cream Flight 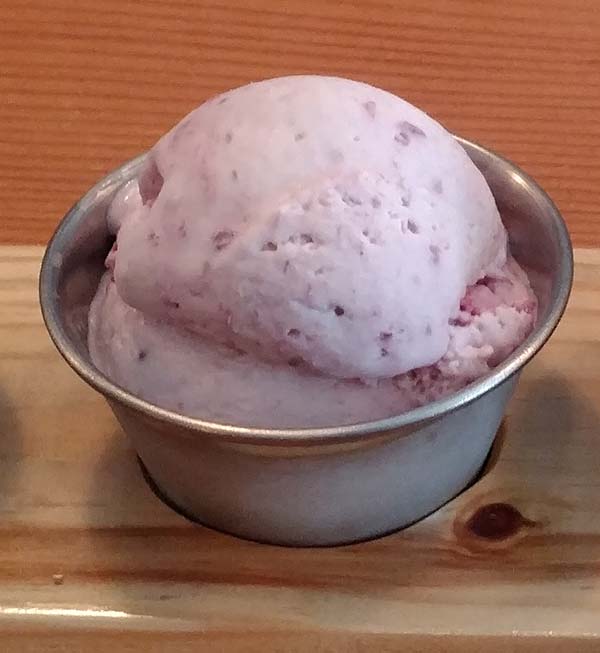 For those of you are looking for the intro about the business, please refer back to my post talking about The House boozy ice cream flight.

Bird Dog is a flavor of ice cream consisting of blackberry whiskey with fresh blackberries mixed in. It’s fruity, sweet, and neither strong nor weak in terms of flavor. I never felt like anything was overpowering, and I never felt like this was missing any flavor either. It actually kind of tasted like a blackberry jam towards the end, and would probably accompany a dessert waffle nicely.

There is barely a burn by the blackberry booze. For those looking to taste something less like a cocktail, this is perfect. Tasty, and there’s enough oomph that you can tell there’s a buzz coming, but not enough that any person grossed out by the taste of alcohol would wretch in disgust at the taste of this flavor. Then again, if you hate the taste of alcohol but are coming to eat alcoholic ice cream, then I have to say, that mistake lies completely with you.

Downsides? Well… I mean, the blackberry seeds do kinda get stuck between your teeth a little bit, but aside from that, it’s a pretty decent flavor.

This ice cream really wasn’t as potent as some of the others. There was hardly any alcohol taste, and while sometimes this is the sign of an ice cream that can creep up on you, this was not the case. On a scale from one to five, with a one being that sip of wine during communion and a five being back to back shots of ever-clear, I’d have to give this ice cream a two. I’m sure if I ate enough of this, I’d eventually feel something, but if I was to compare it to other alcoholic ice creams like the ones at Tipsy Scoop or 50 Licks, I’d say they are fairly average in terms of alcohol potency.

It’s sweet, has some alcohol in it, and it finishes smoothly like a blackberry jam. It’s pretty good overall, and of all the flavors I ate that day, this one is right in the middle. I would rank third for this particular set of ice creams.

As I stated before, there are another alcoholic ice creams I tried alongside this one from The House. So read another review, and then leave a comment to let me know what you think!