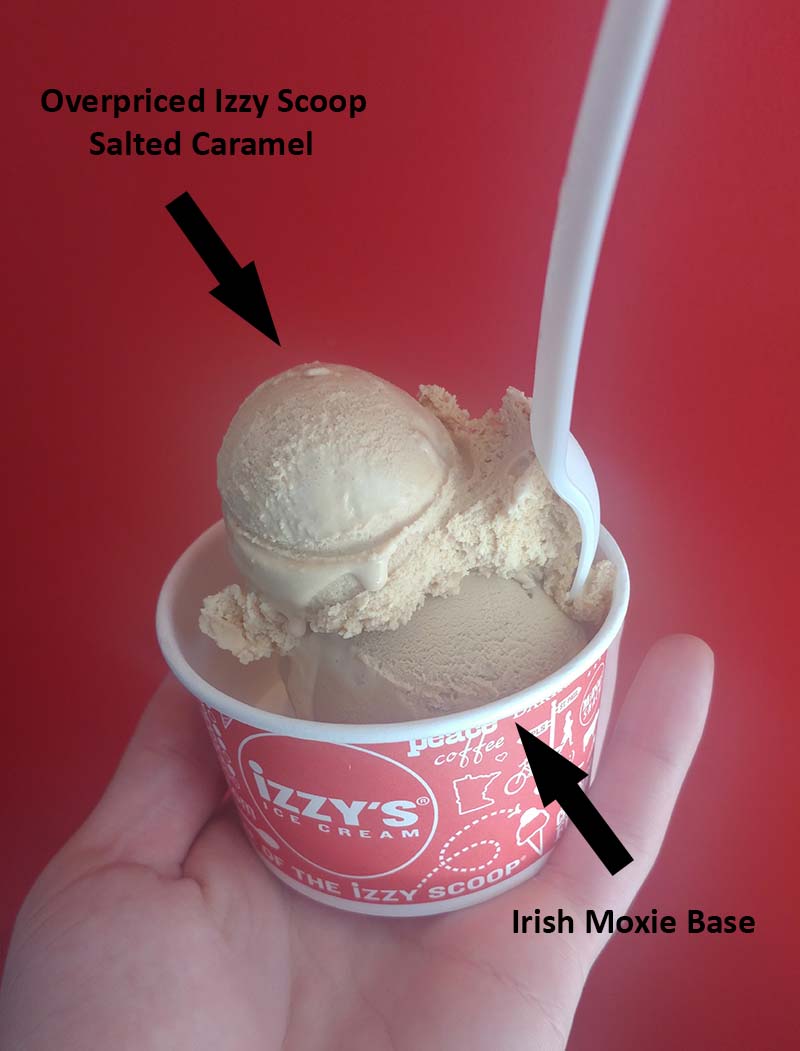 Izzy’s is certainly a solid ice cream shop. I have no qualms about this. Their product is above average, and their prices are pretty reasonable. So why was I not impressed and sucking the Izzy dick like everyone else who visits them?

To find this answer, I looked on the inside and came to realize a few things.

For starters, the “Izzy Scoop” should not even be called a scoop in the first place. It’s really a glorified sample that they put on top of a scoop so that they can seem more generous when allowing you an extra 1 ounce (that they charge you for by the way) on top of the existing scoop that you already pay for.

Secondly, the flavors were pretty decent, but not mind blowing by any sense of the word.

The Irish Moxie allegedly won some local awards for best flavor of the year, and I found this hard to believe. First off, this flavor claims to use Jameson to make this coffee flavor a little more Irish, but there is no alcohol flavor to it. The alcohol is cooked off and along with it, the alcohol taste. It’s whiskey without whiskey alcohol flavor. Do you know what a coffee and whiskey ice cream without the alcohol tastes like? Coffee! It’s not even intense coffee flavoring, so it’s more of a glorified frappe with semi-soggy Oreo chunks and Heath bar bits mixed in. Am I outraged? Kinda… but not really. Like I said, it’s still a decent to above average flavor, but I would have expected more from a description tag that has a whiskey component to it, as well as a winner of Flavor of the Year award.

I’d say just about everyone and their mother believe they have the best salted caramel ice cream recipe in the country. After traveling to over 100 different ice cream shops, I often ask what their best seller is, and 9 times out to 10, they say it’s the salted caramel. Say what?! Since when has salted caramel been America’s new ice cream sweetheart? And the differing types of salted caramel are wide ranging as well. The caramels are mostly the same across the board, but there is a spectrum of salt that makes or breaks the flavor. Some have virtually no salt and are basically caramel, while others try too hard to get a high dose of both sweet and salty, and end up going far beyond what any salted caramel should be.

At Izzy’s, I’d say they are leaning slightly towards the latter side of center from the spectrum I mentioned above. It tows the line between sweet and too salty. It’s certainly not the most potent salted caramel, but for those who like the salt to be a mere accent to the caramel instead of a co-star, might find it a little bit much.

You may have read my description above and may be a tad bit confused. You may be thinking, “You said it was good at first, but you then it sounds like you hate it when describing it?” Well, I wouldn’t say hated it, but I was definitely less than impressed. Because of this, I felt the need to point out their flaws a little more prominently than some other places. Perhaps they began to rest on their laurels from an award that was given to them back in 2003, and while trendy and a chic contemporary ice cream shop, the flavors left me wanting.

I often say that this eating ice cream business is completely biased, and maybe it just didn’t live up to the hype. A lot of people were saying it’s the best in Minnesota, and while it was solid, I definitely think there are other shops on par with Izzy’s, if not greater.

Let Me Know What You Think

Whether you liked this review or hated it, I actually do want to know. I know that sometimes I can get a little caught up in the moment eating ice cream, and while I stand by my review, sometimes I can go a little overboard describing it or the business. Let me know what you think by sending me a message on my contact page, and I’ll happily read what you have to say. I hope to hear from you soon!