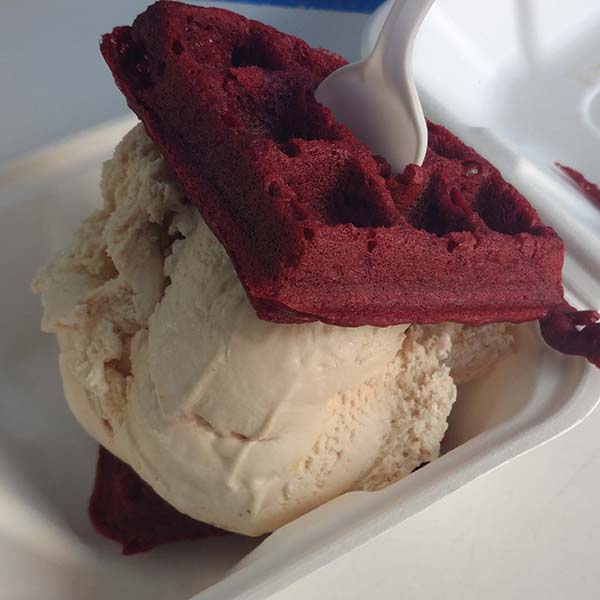 Like I stated in my last Mikey Likes It post, the Mac Daddy is an appropriate name considering it’s probably the best thing on the menu. It’s the damn Mac Daddy of ice cream sandwiches, and when I describe the taste, you’ll understand why.

Going into it now, the Mac Daddy is amazing. Do you see how the spoon penetrates the waffle? Do you see the to-go box containing this monster? Do you see the near perfect ice cream to waffle ratio? There are just so many things going on here it’s difficult to know where to begin.

Actually, before I begin, let me just note, it’s important to spoon through this thing. I first lifted the thing and tried to eat it like a sandwich, but realized not only would I have to unhinge my jaw just to take a bite, but based on my past experience, the whole thing would discombobulate in less than a minute. There’s a spoon on top and it’s placed in a bowl for a reason. Use them.

The ice cream itself is pralines and pecans base, with pecan pie chunks mixed in. And because this is hospitality from the south, just like the sweet tea that hails from that region, the sweetness of this flavor is some next level stuff. There’s an intense butterscotch taste coming from the pecan praline, and when combined with the waffle, in some ways it’s like a beautiful interpretation of waffles and syrup. There’s this natural greatness emitting from this repackaged breakfast/dessert, and the whole thing just feels… right. The waffle is soft and slowly sponges the cream, but it never becomes too soggy. It contains, but never traps the flavor of the ice cream. And when you add in the mix of pecan pie chunks mixed in, the whole creation is then elevated one step further. These small nutty chunks just really help to give a small nutty depth to it, and help the waffle to balance out the unending sweetness of the praline cream.

Furthermore, the ice cream is also rich and thick to a point where the spoon actually bends. If you’re digging that rich creamy goodness that makes Cold Stone Creamery look like soft serve, you’ve come to the right place.

I know, it feels like I’m sucking some Mac Daddy dick as I go on and on about it. But fear not, for as delicious as it was, there are a few small dents in the daddy defense.

For starters, this thing is heavy. Like this won’t just give you a sugar crash, but we’re talking Titanic ice burg crash. That ice cream will settle in your stomach like the a sunken cruise ship at the bottom of the sea. I noted how there’s a bigger option than the Mac Daddy. For the normal folk, I would not recommend it. And even if you aren’t normal folk, don’t eat that and the operate heavy machinery. Even if  your pride is saying, “No, it’s fine,” don’t listen to your pride. Because if you get in an accident, and have to sue Mikey for the damages caused as a result of eating this thing, there will be a whole lot of vengeful fans who will blame you for any bad things that happen to Mikey from there on out.

Also, about the red velvet…. I’m going to be honest, it barely tastes like red velvet. Probably because the red velvet is associated with the cheesecake so much, but at when I tasted it, I was a little let down that I wasn’t reminded more of the tent pole dessert that uses it. It’s pretty much just a red waffle, and while that looks cool, don’t expect much more than that.

Thirdly, the price. You got to remember that you pay the NYC premium on all goods and services, so even though you aren’t in the heart of Times Square, the price for a Mac Daddy would make you think you are.

The whole thing is amazingly sweet and delicious, but there are a few drawbacks. The red velvet doesn’t really mean much for the waffle’s taste, for some, the whole thing might be too heavy, and then there’s the NYC premium pricing. All that said, I would still recommend coming to Mikey Like It and trying one, regardless of drawbacks, just because this is some next level ice cream creation inventing that isn’t found at too many shops around the country.