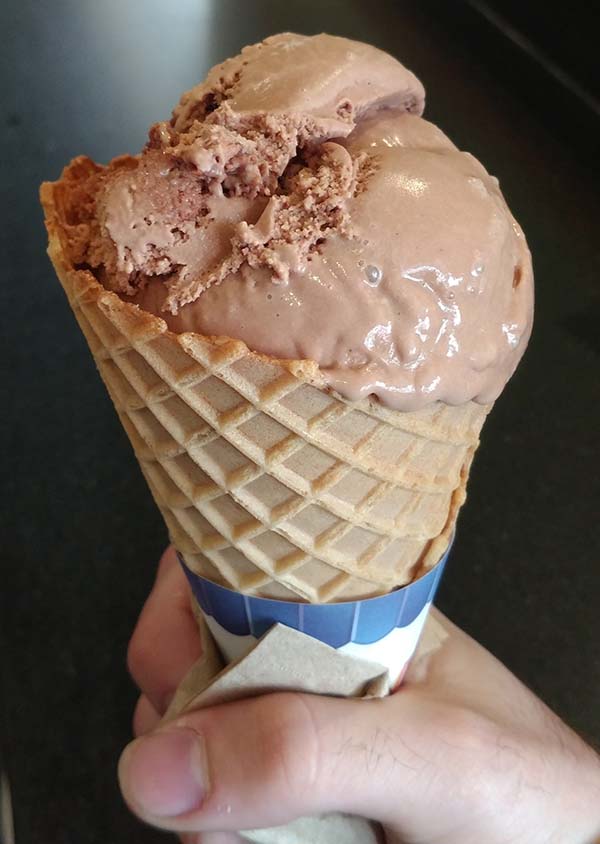 After The Ice Cream Cafe’s surprisingly delicious ice cream, I didn’t want to underestimate this state again. With that in mind, I moved onward to Jackson, Wyoming, where Moo’s Gourmet Ice Cream awaited.

Walking in, I was confronted by a bro working behind the counter, whose ethnicity sounded either Austrian or Romanian(so imagine like a modern day, less ripped Arnold Schwarzenegger). Hearing my tale, he goes into a spiel of his own and starts talking a pretty big game. He tells me, “Bro, you came to the right spot. We have the best ice cream in the State, and maybe even the country. We get all our ingredients fresh, and we have the best vanilla anywhere. It uses Madagascar vanilla beans. Nobody else does that. Our mint, uses real mint. It’s not green. Have you ever seen any other ice cream shop do that?”

He went on and on talking about this shop’s gourmet qualifications, rhetorically asking me if I’ve ever experienced anything like them. After the fourth or so rhetorical question, it took everything I had not to shout at him saying, “Yes, I HAVE seen this. You are not as special as you think. It’s a big world out there, and you think you’re king of the sea, when you’re practically a guppy in a lagoon, not even thinking about the size of the ocean behind you. KNOW YOUR PLACE!”

If you can’t tell, I was slightly peeved that he kept saying how original their shop was, without even questioning how original it truly was. There is a difference between confidence and blind arrogance, and I think this guy may have crossed it.

Then my internal monologue hits me upside the head with a quaint little speech. “Fool! You’ve gone back to the underestimating again. Clear your head. You know what? Maybe this guy actually does have some mind blowing ice creams behind the counter. Perhaps you should TASTE them first. You wouldn’t want your annoyance to impact the ice cream’s taste.”

I taste them- searching for some higher level quality he spoke of.

*Heavy sigh… They’re pretty normal. Imagine somewhere around a step and a half up from Breyer’s ice cream. No where near the level of mind blowing.

I taste one or two others when an unusual combination crosses my eye. Chocolate Cabernet Sauvignon.

At the sample, it was delightful. A semi-dark chocolate with just a small wine finish. It wasn’t bitter, and its fruitier aftertaste was like a softer, fruity, fancy truffle filling in a Valentine’s Day box of chocolates. The chocolate was decently strong, but the wine had a small accent to it. Perhaps this place is more gourmet that I initially anticipated.

This was the one.

I ask the bro how he recommends I should take it (cone or cup). He says, “Bro, gotta go waffle cone. We make these fresh here. Not imported. They’re the best anywhere.”

Internally rolling my eyes, I take him up on the recommendation even though I’m pretty sure he’s just going for the upsell.

As I take the cone, I notice a few problems.

First, it’s melting, fast. You can even see the ice cream melting in the image above. It’s not like I was holding it outside in the sun for minutes on end. Within a minute of taking the cone, paying for it, and taking one picture with my phone, the ice cream is reverting back into heavy cream. So much so that a bubble started to form. It reminded me of what you get as a milkshake becomes room temperature. The chalky film is creeping up around the surface, and I’ve barely even tasted it!

Secondly, and this is probably the most important part: there isn’t enough wine. And I don’t mean this in a Sex in the City, there’s never enough wine, kind of manner. I mean in terms of ice cream flavor. After two bites, the wine is drowned out by the chocolate. The wine is now barely even an aftertaste, let alone a supporting character to the chocolate in this ice cream. I mean, you have to really search for it on your palate. Then, adding insult to injury, the waffle cone comes in. The wine that was barely tasted before is now nonexistent. It’s just a slightly darker chocolate, fast-melting, ice cream. It feels like the gourmet is gone, and now it’s just… disappointing.

Thirdly, the PTQ (price to taste to quantity) ratio wasn’t so hot. This has less to do with the flavor, and more with the price. Perhaps it’s because they’re located in the middle of nowhere and ice cream supply is low, or it’s the fact this is a resort town. Whatever the reason, you’re paying downtown NYC or LA prices for middle of nowhere mediocre ice cream. It’s no Ice Cream Cafe, and about double the cost. I think it’s just simply not worth it.

The ice cream with wine is a great idea with a poor execution. I really wanted this to be a great flavor. It has all the correct elements a good flavor should have:

The wine is barely present, and while a decent chocolate, it’s disappointing when you think you’re about to get your eaty, drinky-drink on, but don’t.

If you want to read other quirky ice cream reviews, be sure to go to my Royal Reviews page. There you’ll find the most recent ice cream reviews I’ve written, and see what other ice creams are out there in the Ice Cream Kingdom.