The One Upping of a Now Standard Classic 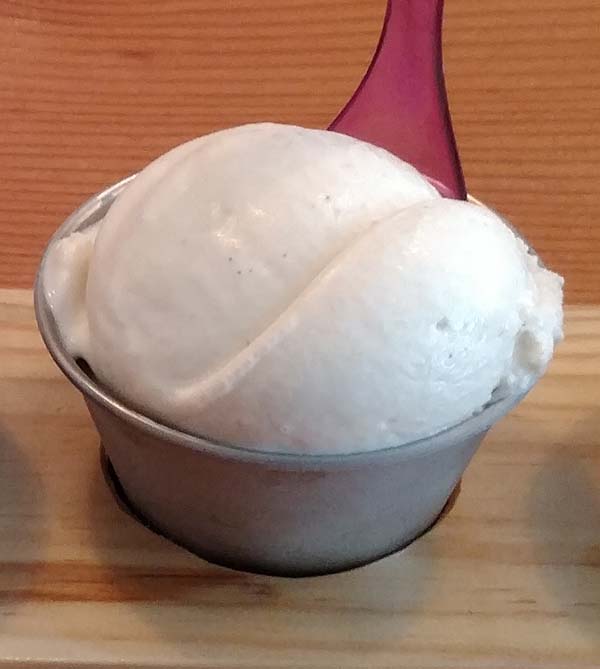 The third installment of five part flavor series from my trip to The House is now here!

For the first time readers just finding out about The House, let me catch you up to speed. Located in San Antonio, TX, The House offers some of the most potent alcoholic ice cream, anywhere in the country. And with five alcoholic flavors that rotate daily, I just had to try all five the day I went. So for this post, I discuss one of their alcoholic ice cream flavors, bourbon vanilla. Phew, done.

As the ice cream kingdom has grown in recent years, bourbon vanilla has become something that is no longer a wild and crazy flavor. It can be found at local supermarkets, and ice cream shops all around the country. Based on my own anecdotal perceptions, I’d have to wager it’s probably about as common as a spiced chocolate- mildly unusual, but nowhere close to unique.

At The House, there’s a difference though. While every other bourbon vanilla ice cream cooks off the alcohol (you know, for children’s sake and stuff), the good people at The House leave it in. Truthfully, I think this is the way to go. I mean, when you cook off the bourbon, it’s like a dragon that doesn’t breath fire. It’s like a PS4 without online gaming capabilities. It’s like something that loses its primary function, only to have to rely on the auxiliary features… it just isn’t the same. While I appreciate that the other ice creams are providing an intro taste of sorts to get others into the idea of bourbon, it isn’t bourbon in its truest sense. And while I wouldn’t call alcoholic bourbon ice cream bourbon in the truest sense, it’s still a step closer in the right direction.

Alcoholic Bourbon Vanilla From The House

The bourbon vanilla here is slightly different than standard versions. Using a honey bourbon instead of regular, this means there is a secondary sugary sweetness alongside the soft vanilla base. And when accented in tandem with the bourbon burn, you get two parts sweet and one part bitter. There is enough bitter to make it feel adulty, but not too adulty that it overtakes the innocent child-like sweetness that is ice cream. Furthermore, part of its beauty lies in its simplicity. Simplicity to offer a light vanilla with a small bourbon burn that comes with a small honey sweetness simultaneously. None of these three flavors are extremely potent, but it is strong enough that I wouldn’t call it bland.

Going off that note, due to it’s lack of potency, it would actually pair really well with the majority of other flavors- both alcoholic and non alcoholic. chocolates would be softened and sweetened, like a black and white cake. Hard fruity flavors would also become creamier, in an almost Creamsicle like manner. And because of its softness, it should be able to play well with most flavors without overpowering them. In terms of what to pair with, for the sake of argument, I’d recommend another alcoholic ice cream. The flavors should be able to cohabitate with one another, and you won’t lose any potency in terms of alcohol content like you would if you paired it with a regular flavor.

If trying this solo though, who flavor be for? I noted that it’s soft and simple, and pairs well with others, but if it’s alone? Then what type of person would enjoy this the most?

If super busy flavors kind of annoy you, and believe that simplicity is the ultimate sophistication, then I’d recommend this flavor. If your go to scoop at any ice cream shop is vanilla, then this would be your corresponding alcoholic ice cream champion. If all your friends are going out for alcoholic ice cream, drag you along, and you want to indulge alongside them without straying to far from the beaten path, this is your hero.

It’s a pretty darn good flavor, which makes it almost surprising that I would rank this flavor in 4th for the day. The flavor is moderately strong, and would work well with others. But sadly it’s lack of complexity does make it a little basic and may not leave as strong of an impression as the other flavors. And for that reason alone, it comes in fourth.

In the event you read this review and want to learn about the other alcoholic ice cream reviews from The House, you can find the gateway link to the other reviews I tried here. There were five flavors total, with this one as the third. I hope you enjoyed this review, and let me know what you think!