The House – On The Rocks 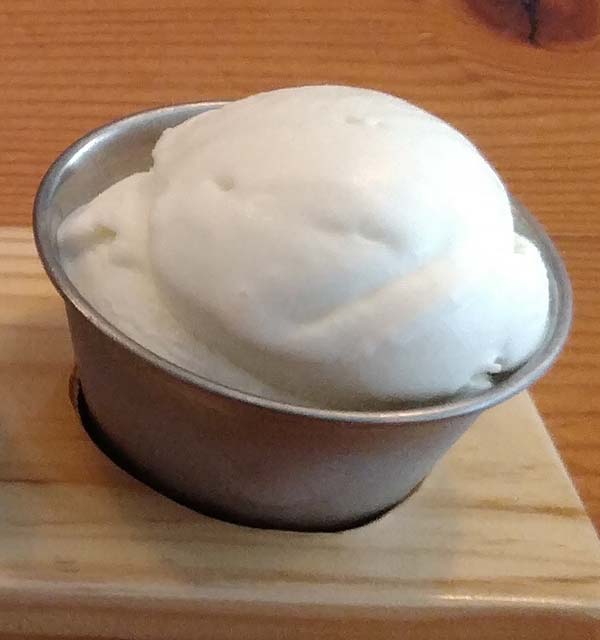 This margarita flavored alcoholic ice cream was the fourth and probably lowest rated ice cream I tasted while at The House, in San Antonio.

Now I bet a couple of questions might be running through your mind right now. “Wow, lowest rated… was it bad? Or was it just less than great like the other ice cream flavors? Also, isn’t margarita ice cream somewhat redundant? I mean, Margaritas can already be served as a slushie of sorts, so is another chilled/semi-frozen version of this beverage even necessary?”

Woah, hold on there sport! One question at a time. Let’s start with the latter questions of if this is even necessary. The answer is of course! Did astronaut Alan Shepard NEED to golf on the moon during the Apollo 14 mission? No, but was it bad-ass when he did it? Hells yeah it was! And similar to margarita ice cream, I would classify this in the bad-ass category as well. In the same way that moon golf didn’t replace earth golf, I don’t think alcoholic margarita ice cream will replace all the beverage (slushie and otherwise) versions of margaritas. It’s simply another way to indulge in something so many of us enjoy already.

As for the first question asked about whether or not it was bad… I’ll discuss this further below.

The House “On the Rocks” Ice Cream

As I said before, the name On the Rocks, is merely code for margarita. It’s a strong lime base ice cream with ample tequila. Sadly, that’s about it. No salt, margarita mix, sweet & sour, or triple sec. It basically tastes like tequila and lime. What worse though, is that as strong as the lime is, the actual lime flavor tastes a bit muted. It’s really more like tartness incarnate. As if they took the essence of citric acid, and through that into ice cream, and put some tequila on top of that. Holy puta! I took a bite and almost did one of those things where a dog realize what terrible thing they’ve eaten, and vigorously shake their head while sneezing it out. Thank Jesus, Maria, & Jose that it was only a three ounce sampler from a flight, or I would have had a seriously hard time finishing if this was in pint form (not to mention, I probably would have been shitfaced too- did I mention the tequila in this is super strong?).

So as for a result, you could say I was moderately disappointed. I mean, San Antonio is so close to the border of Mexico, so I guess I assumed that some of the great margarita recipes would also make their way across that border as well, and perhaps find their way into a certain alcoholic ice cream shop.

On the Rocks Conclusion

So I don’t think I ever actually said if it was good or bad. I wouldn’t call it bad, but I wouldn’t call it good either. It was interesting in that I was still able to get a buzz from it because of the tequila’s potency, but the pure lime extract was just too sour to actually enjoy. I would probably like this more as a milkshake, and perhaps with some other margarita elements (sweet & sour mix, triple sec, etc.).

Would I order this again? Probably not, but I’m also glad I was able to try it, so that we can learn from this experience, and hopefully make a margarita ice cream that’s better.