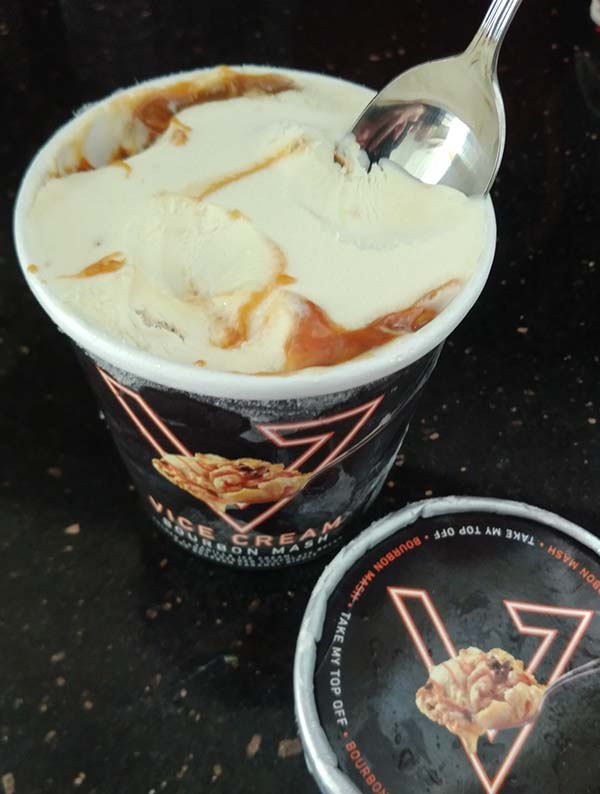 If you’re looking for part 1 and part 2 of my Vice Cream mini series, you can find them here.

So far we’ve looked at some amazing flavors like Toffee Wife and Choc of Shame, but today we look at and taste Bourbon Mash.

That picture of the Bourbon Mash lookings pretty sweet right? The off white cream, with faultlines of caramel swirl oozing to the surface. And even though you can’t see it right now, there are even some chocolate chunks waiting to be excavated beneath the surface. On paper this sounds pretty fantastic.

In reality, this differs slightly. The bourbon isn’t very present, and really has more of an undertone taste as the cream base steals the show. I’m sure if it’s because of the way the bourbon interacts with the cream, or this is by design, but the base has more of a subtle cream cheese base, and isn’t as much of the sweet cream I’ve taste from other creamery distributors. In certain circumstances this would be great, but I wasn’t as much of a fan in this instance.

And that caramel swirl I was pretty jazzed about? After that initial oozing top layer, the caramel goes away fairly quickly, and is used very sparingly throughout the rest of the pint. It’s like mining for oil in the desert. You might find a pocket of it here and there, but you don’t know how long it will last, and it’s hard to pace yourself when everything else is just telling you to drill deeper.

Then there’s the chocolate chunks. They’re nice, and a welcome addition when the caramel fountain runs dry, but can sometimes be a little intrusive and hard to dig into. Which leads me to the biggest issue- consistency.

Despite that the photo shows the caramel as practically a liquid, the whole pint freezes extremely hard. I noted in the Toffee Wife review how smooth and soft the whole thing was to scoop into, but that was certainly not the case here. Even after letting the pint thaw for around 4 minutes, it was still quite durable at its core, and for elements like the chocolate chunks, it did feel like excavating dinosaur bones in a tundra.

Was it good or was it bad?

This is one of those ice creams that I’ll sound all pretentious in critiqing it, but when push comes to shove, I’ll eat a full pint of this in a single sitting. It was decent tasting because even with the bourbon as an element on the backend, it was still interesting. But of all the flavors I tried of Vice Cream, this one was probably the weakest. And because I didn’t want to sound like I was sucking their dick too hard, I wanted to give a balanced less than positive review to counteract the other positive reviews noted prior.

If you want to try Bourbon Mash so you can tell me how wrong I am, you’ll need to find out where they are located near you. Luckily, their store locator can be found here.