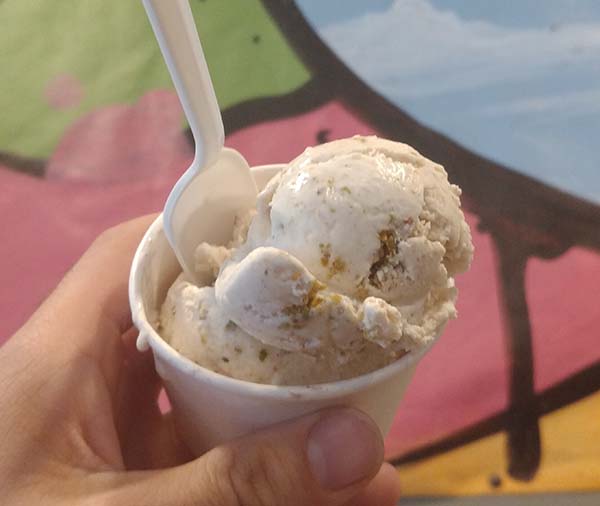 Rhode Island is something of a small state. In saying this, I mean it’s fairly easy to knock out a couple of different shops in an afternoon, even if you aren’t in the same city. So when a friend who went to Brown told me of the local favorite known as Three Sisters, I made it my mission to try them out, even if they weren’t nominated for any of the supposed ‘Best Ice Cream in the State’ awards.

Upon entering, I was actually impressed with the shop, and began to wonder why they hadn’t crossed my research radar before. They’re trendy, had good cream consistency, and were located in a college town where it’s easy to get digital reviews and publicity. I saw some flavors, but was actually most drawn to the Kulfi. Even though I had had Kulfi not too long ago in Portland, I felt compelled to try the Rhode Island rendition of this flavor.

So I’ll say right now that this isn’t the exact same recipe of traditional Kulfi, or even the Kulfis I tried on the West Coast. The Kulfi here consists of pistachios, cinnamon, and cardamom, all inside an almond base. Traditional Kulfi is supposed to have rosewater or saffron, cardamom, and pistachios. Perhaps even an element of fruit like mango.

So for this flavor… I both like and dislike it. Ok, maybe dislike is pretty harsh, but perhaps disappointed would be better phrasing. I really like the lack of floral potency that was replaced with cinnamon. This gave the other elements more room to flourish and express notes of flavors without becoming tainted by one smell. Cough, rose, cough cough. Too much rosewater reminds me of potpourri and in turn reminds me of the disgusting french lavender ice cream that scarred my taste buds for life. At the same time, this is also what I disliked about it. Arg, so infuriating, I know! It’s kind of like when you are told the group is ordering a pizza, and then it turns out to be BBQ chicken pizza with. I don’t hate this, but I was just expecting something more marinara-y and less BBQ-y.

So while I wrestled with this idea of liking or hating this flavor, I looked up from my cup to notice a stereotypical nuclear family of four having a fun conversation as they too were eating Kulfi! Laughing, smiling, and generally enjoying one another’s company, it was a simple, yet beautiful sight to behold. The kids were maybe 10, but that curious joy that comes from trying something new and strange had the two young ones with smiles from ear to ear. And it was in this moment, that I just thought about enjoying the moment. Not to compare this Kulfi to those tried in the past, and just enjoy the ice cream. So I did.

This Kulfi ice cream is delicious in it’s own right. For those who might not have tasted this flavor before, it comes in waves, but you have to really think about the taste to notice it. The light ginger snap taste from the cardamom and cinnamon come first, but after that taste fades into the back, the pistachio and almonds come forth with a nutty base taste that supports the foundation of this flavor. The two waves together go back and forth until your tongue numbs and they kind of blend together more in the nutty spiced taste.

Texture wise, the pistachios are a little bulky, but not terribly intrusive, but I think they could be chopped finer and be spread more evenly throughout. Otherwise, you’re looking at another heavy and rich New England type of consistency that bends the spoon and leaves you with that full satisfied feeling upon completion.

And that was that. I enjoyed the moment, the ice cream, and the flavor. My work was done, and I was satisfied…

P.S. For those wondering how close I was standing in order to determine which flavors of ice cream that family were eating, I was about 10-15 ft away. Luckily one of hte kids mentioned loudly about the weird Kulfi flavor.

So this Kulfi is both better and worse than the ones in the West. I like the lack of potent floral elements, BUT, in some ways it doesn’t feel like Kulfi without it. The consistency is solid and not invasive, so that’s a plus, but overall, the Cool Moon Kulfi in Portland, OR, slightly edges out the Kulfi here. That said, it’s still a good flavor and one that can be enjoyed with your family all the same.

If you want to try Kulfi or any of the other flavors at Three Sisters, they are located at 1074 Hope St, Providence, RI 02906.

To the very few people who have even tried Kulfi before, what is your favorite version? In other words, what ingredients went into that flavor? I’m curious about all the different types, and how they differ, so if you have a recipe you think is just the bee’s knees, let me know. Either leave a comment or send me a message on my contact page. I hope to hear from you soon!