What the Hell is a Dirty Sailor, and Why Would You Want That as an Ice Cream? 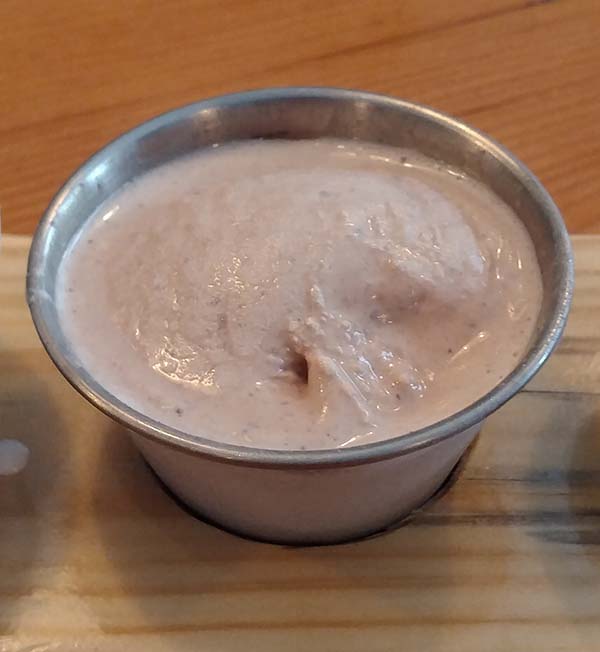 For those of you who were eagerly wondering about the fifth and final installment from The House in San Antonio, let us first do a quick recap. We started out strong with Bird Dog, then moved to French Toast. Followed those up with a bourbon vanilla. Then rounded the turn with On the Rocks. And now finally, we’re here at the Dirty Sailor. It’s been a wonderful journey, and even the ones I wasn’t as enthused with, I still appreciate their place in my flight towards this journey to inebriation.

So let’s get right to it.

Rum, caramel bits, and a spiced chocolate whose after burn kick is reminiscent of a Mexican chocolate I had back in San Francisco.

It’s an interesting name, The Dirty Sailor. I mean, I can understand that rum translates to pirate, and in turn, sailor (a la Captain Morgan/Kraken/Sailor Jerry). But to say the spiced chocolate makes it dirty? Chocolate is no scally wag, and the exotic taste of a chili chocolate should not be classified as dirty! I mean, it just kind of seems harsh, you know? Do you know what’s not harsh though? This flavor! It’s a potent delight.

Like any alcoholic ice cream, it melts fast, and although the image to the ‘port’ (my extensive nautical term for left) side of the post may give off a “soupy” appearance, its flavor more than makes up for any gaps in texture. The rum blends pretty well with the flavor and is downplayed significantly by two things. The first is the strength of bitterness in the chocolate, while the second is the chili after taste finish which both replicates and masks the feeling of taking a shot. It’s hard to describe, but you know when there’s a burn after throwing back a shot or two (usually whiskey)? Well there’s no alcohol burn, but there is a small spiced sensation that comes along at the end in the form of the chili chocolate. Together it’s just kind of a crazy flowing concoction that somehow comes together like the drunken ballads of a certain Sparrow Sailor. It just works. I don’t have any specific rules, or even guidelines as to why this works, but it just does.

Out of the five alcoholic flavors I tried here, I’d say The Dirty Sailor ranks at number two. If it didn’t go soupy as fast as the others, like french toast for example, it might even be in the number one position. But its flavor is still that of a unique rum and chili chocolate, with light caramel notes to it, and I appreciate every potent morsel of it.

Let me know what you think of this review and the others just like it by leaving a comment below!